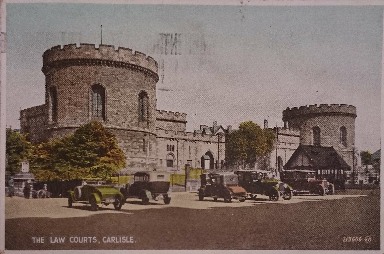 We’re back in the day of black and white:
The card’s enriched with greens and browns,
The blue washed sky is smudged with ink,
Sunshine shadows thin-wheeled cars that wait
for reasons we can never know. It’s Valentine’s,
a brand whose views captured the world,
if not, as maybe here, its heart.

September, and a Saturday. In few words,
our Mr Grindley creates reserved politeness
though his name brews up the passions
of a northern novel’s steaming plot.
Concealing self behind a solitary J, he sends
his kind regards as wishes to Miss Armstrong.
She has no letter or a name to be on terms with.

With weather on his side, her trusted health addressed,
he formally concludes with “yours sincerely”.
It all suggests they barely know
each other well enough to smile.

From Carlisle, she is some 30 miles away, and
He makes doubly sure his card will find her –
See him re-ink his pen to guarantee the address
is clear. He licks the penny stamp he hasn’t torn
too carefully (here’s King George, now 3 years
from his grave) and off it goes into the post –
let’s say, a red and polished box, flat
to the wall, and blazoned VR with a crown.
Back he pads to Jackson Street, a lodging
house with hardly room enough to spare.

That night, at 8, it’s franked – the GPO
Stamps on its advert for the telephone,
Which no doubt these correspondents do not use.
Then, while everyone concerned takes
seriously their Sunday rest, and chapels fill with
hatless men and dowdy women in their pews,
the card awaits its purpose in its sack –
its author bears his separation best he can.

Monday it is heaved and settled on the local
morning train. Along the line, the sorted sacks are
thrown onto the platforms, one by one, with churns
and packages, butter-laden baskets, bikes.

In Hexham, a no doubt older man
takes up the task, with bag, a cap, a uniform
of serge and stiffened sweat, and brings it
to her door in Westbourne Grove – the second
in a row, proud stone, seven steps,
and privacy behind the curtained lace.

The letter box of blackened brass is slim
and tightly sprung, but yields this day –
and then it’s but a moment on the mat,
before picked up to be received and read
with morning tea, or after daily cleaning has
once more re-sanitised the house.

Miss Armstrong, then. Takes off her piny,
Readjusts the clips that hold her hair.
She is another distant cousin to my mother,
maybe twice or thrice removed.
A list of many Marys, Janes and Annes –
a dozen spinsters with their private lives,
post war to end all wars.
Tidiness preserves their lives, gives
fortitude, protects them all from what remains.

This could be it. September 10th, the card
takes up its role. Smiles may not come,
nor yet a slightly quickened heart, a touch
of moisture on the skin – and then its day is done.

Its purpose spent, it keeps its secrets
until nearly nothing’s left to say. But unspoken
wishes, hopes and thoughts of otherness
were then delivered here, and then retained
her lifetime in a bedroom drawer. Why else?
With gloves and lavender to freshen all within –
A neatly written card, preserved, remembered,
pressed within the safety of a book – I would not doubt,
of prayers or psalms, of faith and hope and charity.

Both she and he are gone, in cemetery corners
to become themselves, ignored, with nothing known
or numbered, where now not even funerals
or old mourners come. No Arundel for them,
but this card remains, their joint and single stone.
It’s maybe less than love, while touching,
being touched, is that which might have been.

I’m just passing through crime and warfare
thinking that nothing could surprise me
in the world of second hand books. On my
phone are the images of various collections
that might rub together in a poem or two.
That’s fine then. Lunch ahoy. And suddenly
she’s there. Totally bridal, her white dress
sacrificing the everyday. Sweeping aside
the book hungry and the image seeker alike,
down the shelves she passes. Follows: a husband
[in greys and blacks], the bookseller [charmed,
smooth-haired, pleasantly obsequious], a photographer
[ready to freeze the day she takes her steps
to virginal mortality]. Billowing onto a Victorian sofa
she becomes the moment. An inconsequential
with an iPhone, I retreat down the gallery of books
towards cookery and the domestic life. Somewhere here
are shelves on family planning, relationships,
health and wellbeing, coping with illness,
the future. Now she preens and settles to the lens.
What world there is defocuses, becomes a blur
Of fiction, beauty, travel, science and romance.

It’s not uncommon – there’s a cutting by the door
pins up another. A pair of star booked lovers
share their bartered passion for personal posterity,
second hand. That bride, I bet she’s there,
forever, arranging silk and smiles, keeping that
appointment with a date that never comes.

It is Epiphany – a day of meetings and surprises.
Narrow winter sun pierces lancets,
projecting miracles on whitewash – the walls
just begging for some risen light. The magi moving,

fluid over plaster, bringing gifts to lands
where winter nips unfeeling fingers.
The 4 gas heaters make a brave quartet
But the air is coffin cold, uncaring –

breath clouds, lightens and is quickly gone.
Rejoice. You’re here for what can really bring us
to our knees – the need for death, the hope for life,
the cause of love – and to share a silence that reflects

on wishes, that can condense in actions all our days.
True, Church is more than gravity and graves,
so now we’re older, becomes the everything
we were, gives back the people we’ve become.

But keep away those O.T. resurrected texts
where ministries of learning are grained
like wood into our cells. This stuff goes back
into its own mistakes and never can be changed.

And no amount of transubstantial talk
can match the truth of Christ’s own forsaken cry
up on his cross – “Why have You gone?”
he asks. “Thank God,” it’s tempting to reply,

for it’s that sudden, brilliant lack of faith
that keeps me curious, and here. That pain, torture
and despair that makes a suicide like his a crime
of love to solve as urgent as any on TV.

So souls or cells? How close they sound.
We move eternal into light – science burns
forever, triumphant genome of the stars –
so keep the faith. As Larkin said, it’s going on.